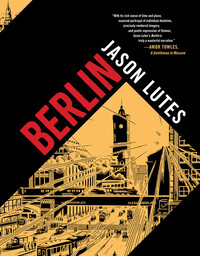 This award-winning masterpiece shows the rise of Nazism in Germany. Available now in paperback! Berlin is one of the high-water marks of the comics medium. For twenty years, Jason Lutes toiled on this intimate, sweeping epic before the collected Berlin was published in 2018 to widespread acclaim, including rave reviews in the New York Times, The Guardian, The Nation, Vulture, Washington Post, and many other outlets. Lutes?s historical fiction about the decline of the Weimar Republic and the rise of fascism is seen through the eyes of the Jews and the Nazis; the socialists and the socialites; the lavishly decorated queer clubs and the crumbling tenement apartments. Marthe Müller is an aspiring artist escaping the memory of a brother killed in World War One by throwing herself into a life-altering romance. Kurt Severing is an idealistic journalist losing faith in the printed word as fascism and extremism take hold. The Brauns are a family torn apart by poverty, politics, and the May Day protests of 1929. The Cocoa Kids are an American jazz band slowly realizing there?s no place left for them in a changing Berlin. Lutes weaves these characters? lives into the larger fabric of a city slowly ripping apart, crafting a polyphonic novel that is rich in its historical detail and as timely as ever in its depiction of a society slowly awakening to the stranglehold of fascism.