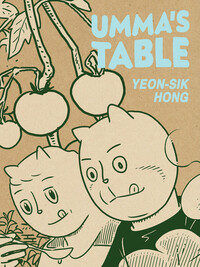 Following his acclaimed English-language debut Uncomfortably Happily, Yeon-sik Hong returns with a graphic novel that is as insightful as it wrenching as it probes life with aging parents and how we support the people we love. A new father named Madang, moves to a quiet cottage in the countryside with his wife and young baby. He?s excited to build a strong foundation for his growing family but his priorities are divided. His elderly parents are impoverished and struggling to survive. He becomes the primary caregiver for his ailing mother Hyung-Soo, which also means negotiating a fraught relationship with his father. As her illness worsens, he accompanies his mother on many hospital trips. Madang overcomes his exhaustion and frustration by reminiscing about family meals together, and particularly Hyung-Soo?s kimchi. Memories of her cooking and the act of dining together are elevated to glory with Madang and his brother often breaking into song in response to her magnificent meals. These joyful depictions, however, are juxtaposed with Hyung-Soo?s hospital room. After Hyung-Soo dies, Madang is struck by the incomparable dedication she showed in caring for and feeding her family, who always came first. With an unassuming wisdom, Umma?s Table serves as a reflection on the enduring nature of family and the power of tradition. Translated from the Korean by Janet Hong, an award-winning writer and translator based in Vancouver, Canada. Her translations include Ancco's Bad Friends (Drawn & Quarterly, 2018), Han Yujoo?s The Impossible Fairy Tale (Graywolf Press, 2017), and Ha Seong-nan?s The Woman Next Door (forthcoming from Open Letter Books in 2019).