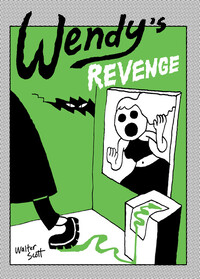 This critique of the art world will have you crying with laughter In Wendy?s Revenge, Scott?s titular heroine returns with a fresh set of awkward misadventures and messy nights out. When the book opens, aspiring artist Wendy has decided to move to the west coast to clear her head. She plans on getting some quality time with her collaborator and friend Winona, only to find Winona packing up to leave, having decided to move back in with her mom on the rez. All alone, Wendy endeavours to foster community in Vancouver?s bleak art scene. When her hope and optimism are all used up, she packs her bags for an artist residency in Japan. Wendy then gallery hops and parties around the globe until she stumbles upon the opportunity to unite with former foe Paloma. Together they enact revenge on VVURST, the German publication that once tore her performance art to shreds. Young artists struggle with mental health issues, they get wasted and hook up with men with gross piercings, and they?re afflicted with an insatiable longing for a stable identity?stability they themselves undermine. Scott?s deceptively simple, inky character drawings evoke millennial culture with such Jungian accuracy that you can?t help but stare and giggle in equal measure. Praised by The New Yorker, Guardian, Globe and Mail, and with an appearance in the Best American Comics anthology, it?s clear why Walter Scott?s Wendy comics have taken critics by storm.